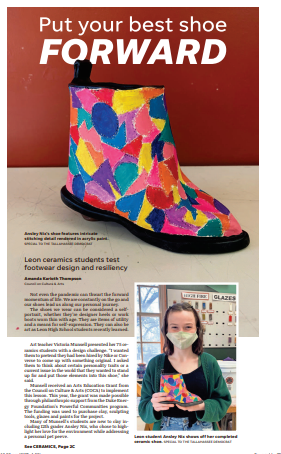 Not even the pandemic can thwart the forward momentum of life. We are constantly on the go and our shoes lead us along our personal journey.

The shoes we wear can be considered a selfportrait, whether they’re designer heels or work boots worn thin with age. They are items of utility and a means for self-expression. They can also be art as Leon High School students recently learned.

Art teacher Victoria Munsell presented her 75 ceramics students with a design challenge. “I wanted them to pretend they had been hired by Nike or Converse to come up with something original. I asked them to think about certain personality traits or a current issue in the world that they wanted to stand up for and put those elements into this shoe,” she said.

Munsell received an Arts Education Grant from the Council on Culture & Arts (COCA) to implement this lesson. This year, the grant was made possible through philanthropic support from the Duke Energy Foundation’s Powerful Communities program. The funding was used to purchase clay, sculpting tools, glazes and paints for the project.

Many of Munsell’s students are new to clay including 12th grader Ansley Nix, who chose to highlight her love for the environment while addressing a personal pet peeve.

“My concept was that my shoe would act as a wallet. I don’t like carrying one around, so why not have it in a shoe? I also wanted it to be eco-friendly so everything I used to create it was recyclable materials,” she said. Ansley’s shoe featured an innovative zippered sole which acts as a wallet, along with built-in coin pouches

Students sketched their concepts and elaborated on various features by creating a full color poster advertising the new shoe. Using paper and tape, students made a three-dimensional, full scale model. This model was then carefully deconstructed, and the individual paper pieces were used as the pattern for cutting out clay that had been rolled into slabs.

Finally, students joined the pieces of clay together and sculpted details.

Ansley confessed, “it was more difficult than I thought it was going to be. I had trouble getting the heel on because the clay kept indenting and cracking. This is only my first time sculpting with clay and seeing it go from paper to 3D was really crazy. I had a lot of errors but I could see how it all fit together.”

When using clay, it’s important to work quickly and the coronavirus caused delays for some students. “We had kids who had to quarantine at home,” explained Munsell. “Sometimes they can’t pick up their clay from school or get someone to pick it up for them so, when they do return to school, they have to restart the project. Even though they may have had an awesome idea, they had to narrow it down, take elements away and simplify so they could accomplish it.

Ansley was able to complete her shoe as she originally envisioned and, after it was fired in the kiln, she turned to the surface decoration.

Many students chose to use traditional ceramic glazes which can bleed and run when fired. Ansley opted for paint instead. “I brushed really small stiches all over this shoe, at least 1,000 of them. I used acrylic instead of glaze so those details wouldn’t disappear.”

In reflecting on this project, Munsell realized her novice students weren’t yet proficient with glazes and that those who opted for acrylics seemed happier with their final shoe. “That was a good teachable moment for me so when I teach this again, I’ll encourage more acrylic because the results are better for them.”

“Sometimes students are a little disappointed because they get their piece out of the kiln and it’s cracked or it’s not what they expected. I try to help them see that it might not look like what you had in mind, but we can work with it. I always tell them instead of starting over, you just have to ‘Bob Ross’ it. Every time something goes wrong, make it into a happy accident, turn it into something else.”

No doubt the iconic PBS art instructor and TV host would agree. In these days of COVID, we’re all having to adapt, think creatively and be resourceful. The pandemic is now part of each student’s personal journey. These sculpted shoes will tell that story and be a symbol of their resiliency.

“I didn’t not expect to teach ceramics during a pandemic,” said Munsell. “It has been stressful but so much fun. During this time, I keep telling them we just have to keep moving. We’re making progress, everything is a work in progress. We’re all learning here, unexpected things happen, it’s part of life.”

This article is part of COCA’s Creativity Persists collection and highlights how area arts educators are continuing to teach and inspire during the COVID-19 pandemic. Amanda Karioth Thompson is the Assistant Director for the Council on Culture & Arts. COCA is the capital area’s umbrella agency for arts and culture (www.tallahasseearts.org).

You are commenting as Anonymous