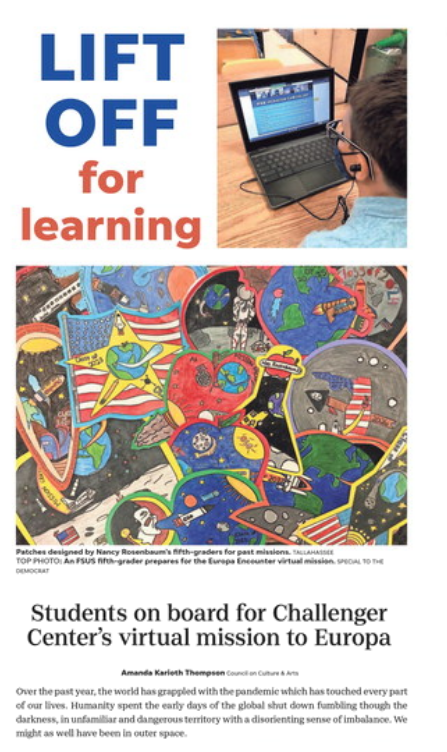 Over the past year, the world has grappled with the pandemic which has touched every part of our lives. Humanity spent the early days of the global shut down fumbling though the darkness, in unfamiliar and dangerous territory with a disorienting sense of imbalance. We might as well have been in outer space.

As scientists learned more about the virus, it became clear we would not be back to business as usual and would need to develop creative and safe ways to move forward. This was especially true for schools and other types of educational facilities such as the Challenger Learning Center (CLC).

CLC strives to provide hands-on learning for K-12 students to explore the solar system. Typically, these are in-person experiences that students gain through field trips to the facility but, as the pandemic descended, it became clear that would no longer be possible.

For Susan Borland, the Education Manager at CLC, the pandemic was a call to action. “When school first shut down, we realized that this would not be over soon. We didn’t know when we would be able to have kids come to the space mission simulator again, so we decided to pivot and come up with a virtual simulation.”

CLC’s simulations approximate an actual space flight with a NASA-inspired Mission Control room and an orbiting space station modeled after the laboratory on the International Space Station. “They would come here and have a multi-faceted day where they would fly a mission, have an activity, they would build something and then see one of our IMAX shows. We had to figure out how to take that same enthusiasm for this simulation and do it completely virtually,” said Borland.

Beginning in March of 2020, she started working alongside CLC Flight Director and technology wiz William Figueroa to develop the “Europa Encounter,” a virtual space mission that retained the spirit of an in-person experience but could be accessed by teachers and students from anywhere, on any device. By the end of August, the finalized mission was being used locally and nationally, as CLC is part of a larger network of similar facilities across the country.

The virtual mission is set decades in the future on Jupiter’s moon Europa. Students work collaboratively to launch a probe which dives deep into the massive ocean underneath the ice sheets. In the process, they’ll learn that Europa’s salty ocean contains more water than all the Earth’s oceans combined. They’ll also analyze the data collected by the probe and ponder what might be hidden in those icy depths. Borland and her colleagues have also developed pre- and post-mission activities including one that asks students to write a press release about the probe’s findings and another that gives students the opportunity to create an illustration of what life might look like in outer space.

Nancy Rosenbaum is a fifth-grade science teacher at Florida State University Schools and, at the beginning of the school year, she was one of the first educators to test out the new virtual Europa mission with her students. Rosenbaum has a long history with CLC and is a current member of the organization’s Board of Directors.

Because Rosenbaum was teaching a hybrid class of both in-person and digital students, she made the ideal candidate to see if the new program could stand up to the technological challenges a hybrid learning situation could present.

“Learning a new system at first was tough but once the students got it, they were all doing their thing and it was just fantastic,” she said. “At one moment I stepped back and thought this is literally what mission control looks like in real life. There’s all this stuff going on and there’s all these people doing their tasks. The kids hang on every word and they’re able to focus on what they’re supposed to be doing while the rest of the mission happening around them. It’s a very authentic experience.”

Whether in-person or now virtual, CLC’s missions are a routine part of Rosenbaum’s class and her students design special mission patches each time they fly.

“I have a whole book of NASA patches that I share with the students. It has all the formal write ups of why they’re designed the way they are. NASA does this for every mission.” Inspired by this tradition, students work in small groups to design patches with symbols that represent the class, the school, and their purpose with each mission. “I try to incorporate art whenever I can,” Rosenbaum said.

For the Europa mission, each student is assigned specific tasks and a role such as navigation, space weather, medical, life-support, or probe. “Through the lessons I teach in preparation for a mission, the kids know that every role is critical in order for us to succeed,” Rosenbaum said.

While flying the Europa mission, if students need assistance, they can communicate with the “NASA help desk” which is populated by CLC educators who help students work through any problems they encounter.

That’s something Julie Sear also appreciates. She’s the middle school science teacher and team leader at The School of Arts and Sciences on Thomasville Road and she said “CLC pushes independence. They encourage teachers to hold back from stepping in to save their students; let them struggle a little bit and feel that empowerment of using the available resources to figuring it out.”

Like Rosenbaum, Sear has a long history with CLC and was also one of the first teachers to try the virtual mission with her students who are all attending school virtually this year.

Sear was especially pleased with the support from CLC staff and the opportunity to work with them to refine the program. “I met with all the educators after the mission to talk about all the little logistical things you don’t think about until you’re in it,” Sear said.

The virtual mission continues to evolve as educators from across the country use it and add their own innovations, inspiring countless kids to think big, especially in difficult times like these. Rosenbaum sparks that creativity and curiosity in her students by talking with them about the next phase of the space program.

“I like to highlight for them that the people who are going to step foot on Mars first, and the engineers, mathematicians, and all the people who are coming together to make that happen, are sitting in schools right now. Whether they’re in a fifth-grade classroom, a kindergarten classroom, or in high school, they’re going to be the ones who do it. I tell them if they want to do this, put your mind to it and make it happen.”

You are commenting as Anonymous